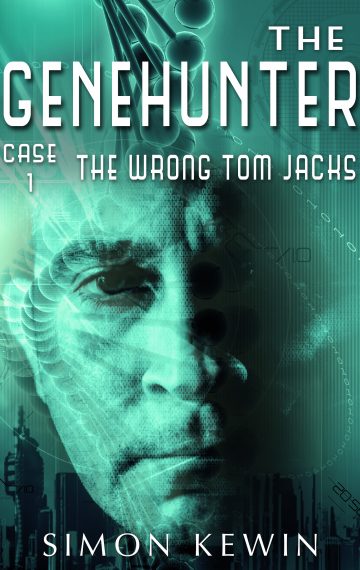 Simms is a genehunter: a detective paid by megarich collectors to track down the DNA of the famous for their private zoos. He’s employed to locate the genetic code of Tom Jacks. But not the rock star Tom Jacks, just an unknown namesake.

The job bugs Simms. Something about it is wrong. Someone is playing him. Problem is he doesn’t know who or why. None of the illegal plug-in technology filling his brain is much damn use. The one person who can help him is an ex-lover, but she’s also the one person on the planet who never wants to speak to him again.

The last thing he needs is Agent Ballard of the Genetic Monitoring Agency pulling him out of the jump network to interrogate him about someone he’s never even heard of.

“can’t recommend it enough. Kewin took a killer concept and made a terrific story out of it”
“a terrific read in a gritty, fully realized, not so distant future”
“I LOVED this book from the very start”

This book is no longer available from book sellers, although it can be downloaded directly from this web site. It is also included in my Spell Circles collection and in my novel The Genehunter.

Simms stood in a circular white room, surrounded by the frozen heads of forty-two dead from the twentieth century.

He recorded every detail of the scene via his brain plug-in. Strictly speaking he had no business being here in the LA Bethesda Eternity Clinic and you never knew when information would come in useful. He didn’t have the clinic’s full client list, but each head sat encased within a two-meter silver cylinder, each bearing a small name plaque his plug-in could resolve. He stored each name away, the one he recognized and the forty-one he didn’t.

“This way. The patient is over here.”

The ratty, unkempt clinician he’d bribed crossed the room, glancing backwards at Simms to make sure he was following. Simms smiled at all of it. At the attendant, so proud of his ridiculous little world, at their insistence on the word patient, at the whole insane set-up. Did these people actually think this was eternal life? That they could conveniently bypass society’s slide into hell? Be woken up in a golden future with all their cancers healed?

Elsewhere in the clinic there were full bodies preserved. The ones who could afford the deluxe package. These poor unfortunates had gone for the cheaper option. Simms almost felt sorry for them. He wondered what sacrifices each had made for even this.

He put it out of his mind. What did it matter? Wasn’t any business of his. People with money paid and facilities like this met the demand. No harm in any of it. Perhaps it wasn’t so different to what he did…

This book is no longer available from book sellers, although it can be downloaded directly from this web site. It is available as part of a single novel, The Genehunter.