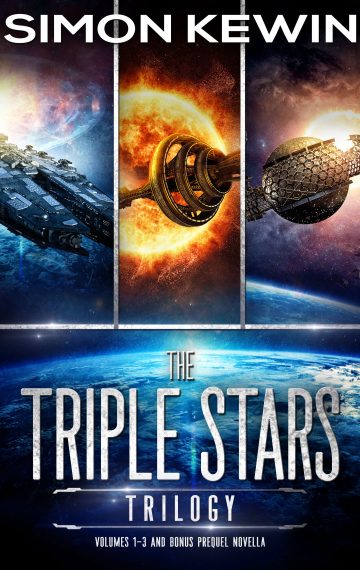 The unfolding mystery
Three warring worlds attempt to resolve their differences over a disputed planet, but the peace talks upon the central Nexus world of Coronade are thrown into chaos when one of the delegates is brutally murdered. Conciliator Magdi, an empath from Periarch, pursues the killer in a desperate attempt to keep the peace talks alive.

Meanwhile, confused rumours circulate about the discoveries made by the Magellanic Cloud, a ship thought lost in the galactic core. Wild rumours warn of a biological or technological discovery that threatens the very existence of interstellar civilisation.

Magdi sees an opportunity to use the rumours as a way to encourage the three worlds back to the table. But has she underestimated the risks she faces?

And has she made the mistake of not taking the troubling rumours seriously enough?

A hidden trail among the stars
The galaxy is in flames under the harsh theocratic rule of Concordance, the culture that once thrived among the stars reduced to scattered fragments. Selene Ada, last survivor of an obliterated planet, joins forces with the mysterious renegade, Ondo Lagan.

The return of an ancient galactic threat
Selene and Ondo piece together the secrets of Concordance’s ascension to galactic domination, and the truth of what it was Vulpis encountered at the heart of the galaxy three hundred years previously.

They uncover an ancient threat to all life – a threat that Concordance seems intent on reawakening to complete its genocidal aims. But they also follow another trail – one left for them by someone or something unknown, a hidden intelligence seemingly guiding them to hopes of a possible salvation.

But each time they unearth a new fragment of the puzzle, Concordance are waiting, its ships and miraculous technology unleashed against them…

The darkness at the heart of the galaxy
Following the clues given them by the Aetheral, the Radiant Dragon and Toruk, Selene and Ondo close in on the existential threat to galactic life unleashed by Vulpis.

They battle Concordance all the way, aided by unlikely allies and mysterious messages. The trail leads them to more artefacts left behind by the Tok, drawing them ever-closer to the secrets at the heart of the galaxy.

But what they find there, and the truth they uncover about galactic history, changes everything…