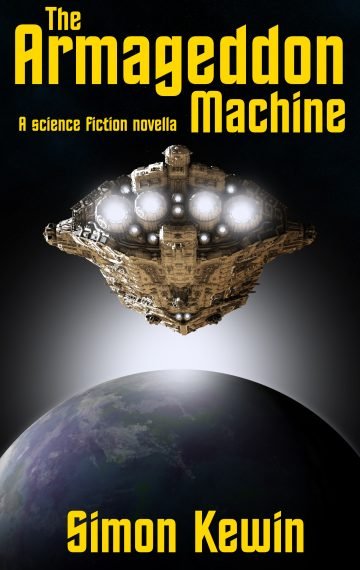 The last, battered remnant of the feared Draconian starfleet limps through space, shadowed by ships of the victorious Million Star worlds. But the Draconian ship is still a terrible threat: it is the Draconian’s final weapon, a device that can trigger the cascading collapse of space/time itself.

Mackenzie, in charge of the Million Star fleet, fears what will happen if he attempts to destroy the device. Then, one of the semi-mythical Xin ancients arrives on his ship, suggesting a plan that appears to endanger all of reality. In the final battle with the Draconians, Mackenzie must decide whether to trust the Xin or not. The fate of the universe itself hangs on his actions…

“A beautiful story of trust and hope in dark times … a masterful, compelling work, with deep themes underlying it that brush against life, eternity, and the meaning of existence.” – Tangent

Mackenzie watched the universe end. It was beautiful, like a flower closing up for the night. Stars and planets swirled inwards, spiralling around and down, faster and faster, collapsing into an infinitesimal particle. As silent as the sunset. The more space/time that was pulled in, the more massive the particle became and the more gravity it exerted on what remained of the universe.

The point of no return had already been passed. It was inevitable now that all of creation would reduce down to a single point. He wondered how it was he was able to watch without being affected. That couldn’t be right. But it was surely only a matter of time. And what did that mean since time as well was being destroyed?

The scale shifted outwards. Now whole galaxies, superclusters of galaxies, were being sucked in. The rate of collapse increasing exponentially, the end of everything suddenly at hand. And then what? Would there be another Big Bang, the start of a pristine, virgin universe? Still he was outside, remote from it all.

There was nothing left but the invisible point and the void and him. And it wasn’t the comfortable, familiar blackness of space he knew so well, but a terrible absence of space, a nullity.
Something still nagged at him that this wasn’t right; he couldn’t be watching this. It occurred to him he must be dreaming. It was a gloriously reassuring realisation but still he couldn’t break out of it. It seemed to be a story he was stuck inside. He promptly lost the realisation…