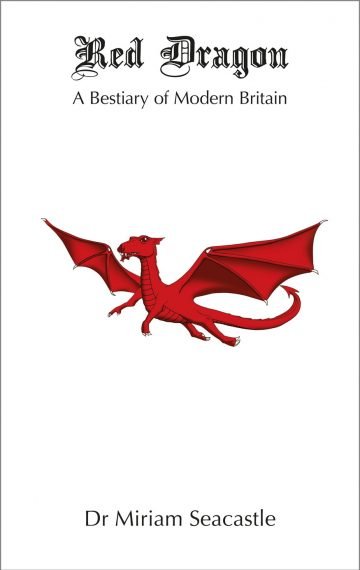 This book proved invaluable to me as I’ve worked on the Office of the Witchfinder General books, and the author has very kindly allowed me to mention the book on my site. It was privately published by the author herself in 1999 in an illustrated, limited edition. Given the importance of the work, Elsewhen Press contacted the Office in Cardiff, requesting permission to examine it. After much obfuscation and bureaucracy (typical of the Office, I’m afraid), Elsewhen managed to contact the Office’s librarian directly. With a little persistence they were given the chance to peruse Cardiff’s copy of the book in a secure facility. They were even able to make a photographic record, which they then used as the basis for their facsimile edition.

Elsewhen subsequently obtained permission to reproduce Red Dragon from Dr Seacastle herself, who expressed delight that her book would once more see the light of day. She also conveyed her concern that all copies would again be seized by the Office. Elsewhen Press assured her that they are firmly of the opinion that this book is an invaluable collector’s item, and that they will robustly resist any attempt to suppress its republication.

Elsewhen even obtained the approval of the illustrator to use the original illustrations in their facsimile. I’m thrilled that the public once again has the chance to persue this classic bestiary. Let us hope that the Office of the Witchfinder General don’t suppress it again.

“A must-have for historians, students, and those interested in the OWG or indeed protecting modern Britain.” – Sally Spender

“Dr Seacastle’s … Bestiary was the product of a great deal of solid research and investigation. It is a short volume … but there is much in the book that is precise. Not only that, she makes several rather inciteful remarks about actions taken by Her Majesty’s Office of the Witchfinder General over the decades.” – Simon Kewin, author and OWG scholar