The first draft of Dead Star (The Triple Stars, Volume 1) is complete! It’s 90,000 words of science fiction/space opera goodness. The manuscript is currently with beta readers for feedback, and then it’ll be off for editing. I hope to have it out later this year, and maybe maybe to have all three volumes completed by the end of the year…

The last survivor of a planet of eight billion…

Are galaxy-spanning science fiction and space opera adventures your thing? If so, would you like read an early draft of my new novel Dead Star? I’m looking for honest feedback on the book – what works, what doesn’t – and I plan to have a completed version ready sometime around mid-May for readers to dive into.

Interested? There’s a simple sign-up form here. All readers who complete the short questionnaire they’ll get after reading the book will be credited by name in the acknowledgements section – if they so wish – of the final published book.

Indie authors are often faced with the dilemma of staying tied to Amazon to enjoy the benefits of exclusivity, or of going wide and publishing to multiple platforms. Although I have experimented with KDP Select in the past, and might again, my instinct is absolutely to go wide. The thought of being tied to one retailer does not fill me with pleasure, however good they may be.

So, I currently publish all my ebooks in four different places: Amazon, Kobo, Google and Smashwords (for B&N, Apple etc.) Recently, however, I’ve added a fifth string to my bow: PublishDrive, who reach a bunch of markets the other distributors don’t – including some big ones in parts of the world I haven’t been able to get to before.

I’ll let you know how it goes, but it seems like a no-brainer to me: always good to have as many possible outlets as possible…

So, novel progress: I currently have three novels in various stages of development. Here’s where they’re at:

Engn II: The Clockwork War – haven’t got a publication date or a cover yet, but this will be appearing through Curiosity Quills press later this year.

The Eye Collector – the first in a series of magical urban fantasy detective stories. Not sure if this will be trad or indie published yet – it’s completed and currently with a bunch of agents to see if it matches any of their wishlists…

Dead Star – the first volume in a galaxy-spanning sci/fi trilogy. Almost certainly going to be indie published, as I’ve found sci/fi and space opera does well there. I’m about 50,000 words in with maybe 40,000 to go. And, strangely, I’ve already written the third volume. If things go really well I might get the whole trilogy finished this year.

I recently decided to overhaul my backlist to ensure everything like covers and blurbs are as perfect as I can make them. I also want to go as wide as possible with my books, including setting them up for purchase as paperbacks (maybe even hardbacks) and audiobooks.

The Genehunter is kind of my guinea pig book; it’s the one I always pick first for these things. I’ve done quite a bit to it: re-encoded it in ePub3 format and updated its cover and so on. 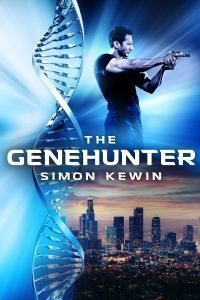 It’s now also available in paperback. I’ve decided to use two distributors: Amazon KDP for Amazon (obvs) and Ingram Spark for everyone else. So far as I can tell, this gives me the best combination of wide availablity and integration with the mighty Amazon. I have acquired an ISBN (978-1-9993395-0-0, oh yes) and soon I’ll be sending a copy of Simms’ adventures off to the British Library as it’s now a paperback published in the UK. Pretty cool.

It’s interesting to compare the quality of Ingram Spark’s printing to Amazon’s though. My Ingram Spark version looks really good. It’s exactly how I hoped it would look. The Amazon verion though? Not so much. The paper isn’t as good and it isn’t as well printed and my sample copy came with a massive crease right down the front cover. It’s poor.

Maybe I was unlucky. I’ll certainly leave my KDP Print version up on Amazon – but I’m very glad I went Ingram Spark too. In my view, they’re the ones to use for professional indie paperback publshing…

Fantasy novella The Clockwork King has a new cover as I felt like the old one didn’t quite match the tone of the story. The new one is much better…

Full details of the novella here.